Built-in Data types (aka Primitive Types) of an entity (for example variables and constants) define the meaning, constraints, and possible values, along with functionality and mode of storage associated with it. Integer, Float (a.k.a. Real or Fractions), Boolean and Character types are referred to as Standard Types or Native Types. Data types can be categorized as Scalar, Pointer and Structured data types. All type identifiers scope doesn't include itself except for pointer and class types. The following data types are built-in and are also known as primitives. 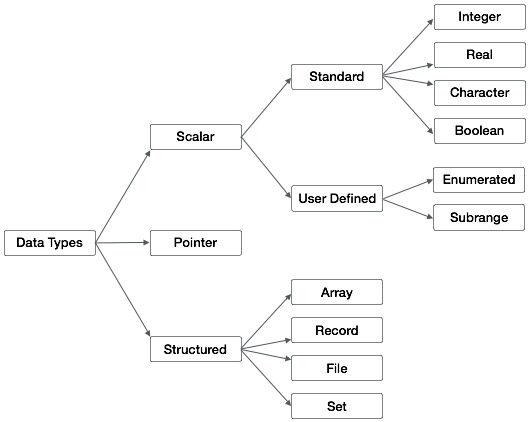 Pronounced /in-tij-er/ is a noun, means a whole number; a number that is not a fraction. In Modern Pascal, there are 4 sizes of integer, 8bit, 16bit, 32bit and 64bit used to hold whole number values from the subrange minimum to the maximums below:

Short for floating-point notation, denotes a mode of representing numbers as two sequences of bits, one representing the whole number and the other determines the fraction. A value's floating-point notation normally comprises three values-M, B, and E-such that M x BE = N, where B is always 2, and both M and E are integral values within the float type's range. These M and E values further prescribe the float type's range and precision. In Modern Pascal, there are 3 sizes of float, 4byte, 8byte and 10byte used to hold number values from the minimum to the maximums below:

Char's set of values are characters, ordered according to the extended's ASCII character set. The function call Ord(Ch), where Ch is a Char value, returns Ch's ordinality. A string constant of length 1 can denote a constant character value. Any character value can be generated with the standard function Chr. In Modern Pascal, there are 3 distinct types of character types, single, wide and unicode. There are two distinct versions of these 3 times, single and multiple character collections or strings.

There are four predefined Boolean types: Boolean, ByteBool, WordBool, and LongBool. Boolean values are denoted by the predefined constant identifiers False and True. They are different memory sizes for memory alignment, but contain true and false, or 0 for false and non-zero for true.

In Modern Pascal a variable of the pointer type references an address in memory, where the data of another variable may be stored. Pointers are a type, which means that they point to a particular kind of data. From a character type, to a structured record type and even an instance of an object structure or class type.

A structured type is a type that can hold multiple values in one variable. Structured types can be nested to unlimited levels.

Dynamic Arrays are similar to static arrays as far a the component type, however, they are useful when you do not know the upper limit in advance. Using the SetLength() command you can dynamically increase and decrease the size of the zero based array.

Functions cannot return the definition array of type, however, these predefined type aliases can be returned as function results.

Records are the complementary structure to an array. Where an array is a collection of like types, record types can be a collection of many different data types. Of course, you can also have an array of your record type. Records provide a well organized way of managing groups of data fields. A few data types are added as pointers (4 or 8 byte addresses) to the actual data, for example a record with an element of the type String will show sizeof(record_type) of either 4 or 8 (depending upon 32bit or 64bit platforms). This is important to remember when you store and retrieve records with these types - you will lose the data. You can avoid this issue by using string[84]; for example to store length byte 84 characters, which is much like using the type array[0..84] of char; where the 0th byte you put in a char(length).

Modern Pascal supports fixed records and records with variant parts. The variant part must be the last element in the record definition. The optional identifier in the union statement serves to access the variant field value, which otherwise would be invisible to the programmer. It can be used to see which variant is active at a certain time. In effect, it introduces a new field in the record.

By default, Modern Pascal will align each element on either 4 byte or 8 byte addresses in memory to achieve optimal access for performance. However, you may want to store these records to disk for example, and to reduce unnecessary padding to disk you can use the keyword Packed Record instead of Record to define no alignment.

Modern Pascal supports the set types as defined years ago in Turbo Pascal. Each of the elements of the set's type must be of the target type. Where Target type can be any ordinal type with a range between 0 (zero) and 255. A set can contain at most 255 elements. Sets are another way in which Pascal is unique from other languages. Whereas, enumerated types allow a variable to have one and only one value at a time, sets allow you to have any combination of given values. None, One, Multiples or All.

A set therefore holds a set of indicators, again up to 255 indicators (or elements). At first this may sound a little tricky to understand, however, it may help if you think of sets as a dynamic array of the elements from an enumerated type, and a boolean of true it is in this set or false it is not.